Latest Award in a Season of Consumer and Industry
Accolades for Wildwoods Amusement Park
The Wildwoods, NJ (September 17, 2015) – Morey’s Piers & Beachfront Water Parks located on the boardwalk of the Wildwoods, NJ, was named “Best Seaside Park” by Amusement Today, an amusement industry news leader, at the 2015 Golden Ticket Awards on September 12 at Luna Park in Coney Island, New York.

“This honor really belongs to our dedicated staff who bring their A game every day to deliver the genuine guest service that makes a visit to Morey’s Piers truly special,” said Will Morey, second-generation partner of Morey’s Piers.
“Receiving the award for Best Seaside Park in what was arguably the world’s first seaside park, Coney Island, is particularly surreal,” added Jack Morey, second-generation partner of Morey’s Piers.
In a joint statement, Will and Jack said, “Growing up in this business and now raising our kids in the business and in the Wildwoods, we all recognize the responsibility we have to the community to preserve the authentic boardwalk experience while continuing to innovate for current and future guests.” 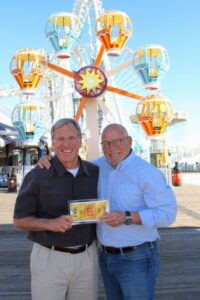 The classic seaside attraction was selected at the top of its category by Amusement Today’s selected panel of experienced park enthusiasts from all over the world, narrowly inching out Santa Cruz Beach Boardwalk, located in Santa Cruz, CA, who has held the title since 2007. Runners up also included Blackpool Pleasure Beach in Blackpool, England and Gröna Lund in Stockholm Sweden.

Morey’s Piers closed out the 2015 summer season earning yet another Ellis and Associates (E&A) Platinum Safety Award, which honors water parks exceeding all criteria for aquatic safety.  “Only 10% of E&A clients, in the world, score in this category and qualify for this award,” added George Rohman, Senior Water Park Operations Manager at Morey’s Piers.  “Earning this award for both Ocean Oasis and Raging Waters means that our water parks constantly exceed industry standards in risk management and aquatic safety, and signifies our commitment to professionalism, training, safety and service.”

Over the course of the season, Morey’s employs up to 400 ride operators and as many as 30 ride supervisors. On average, Morey’s Piers conducts up to 3,000 ride specific operator and attendant trainings each season.