By now not many people remember too much about the short lived Seaport Village that is located on 22nd street in North Wildwood. Most new Wildwood visitors, past the summer of 2008,  know it as that empty pier that smells really bad. It’s a shame to know that at one time it had shops, recording studios and a performance stage and was also the local fishing pier, well sort of.

Take a trip back in time with me as we re-discover the history of Seaport Village.

If you were to look at many historical documents you would notice that Seaport Village and the pier that it sat on didn’t exist until 1988. Before this pier was built there were two another ones in it’s place both called Ocean Point Pier. 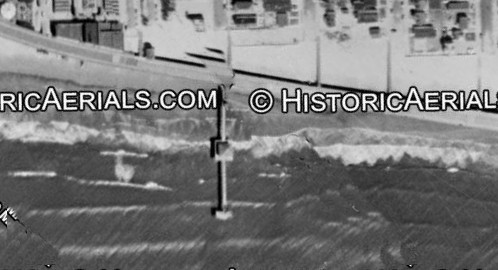 Photo of Ocean Point Pier in the 1950s, By HistoricAerials.com

Built sometime in the 1930s, Ocean Point Pier was a 300 foot long fishing pier that spurted out into the North Atlantic Ocean.
It even had tarot card readers and horoscope readers who claimed they could predict your future.  The Ocean Point Pier was home to the local fishing club called “The North Wildwood Fishing Club”. Some would say that is was the sister pier to the north of the “Wildwood Crest Fishing Club” and pier that still stands today on the beach, waterless and fishless.

Anyone was able to fish off of this pier for 25 cents a day or $25 for the season running from Memorial Day to Labor Day Weekend. Membership into “The Wildwood Fishing Club” allowed you one key and a pass for one guest to fish year round. Membership would also give you access to the “club house” that was an enclosed pavilion in the middle of the pier.

At the end of the pier, on the ocean side, there was a bait stand that offered bait, tackle, hot dogs and sodas. It was a nice convenience to have instead of walking all the way back in land to get what you needed. 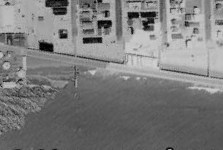 Photo of “After Storm” Pier is almost gone. (You can barely see it on here)

Fishing life on the Ocean Point Pier was great until the storm of 1962. The storm of 1962 ran from March 6th until March 8th and was considered by U.S. Geological Survey to be one of the most destructive storms ever to affect the mid-Atlantic states and was classified as a level 5 Nor’easter. (More to come about this storm on another article). 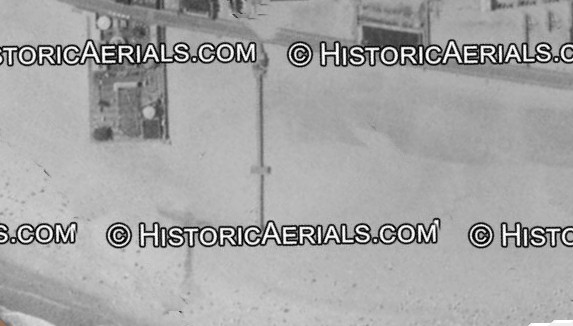 1964 rebuild of the pier, Notice not near the water. Photo by HistoricAerials

This storm caused so much damage to the pier that all that was left were the pilling.  On top of that the storm moved so much sand that the pier and pillings were too far away from the ocean’s edge. 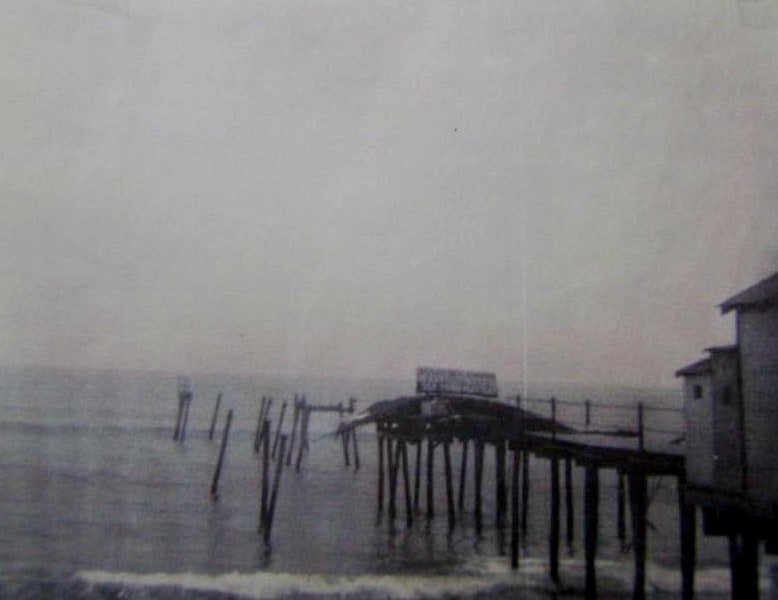 With the money raised by the club and the city, a brand new Ocean Point Pier was built at the same length as the original pier. It was the hope of the club that the ocean would return to the original level but never did. Even at high tide the pier was high and dry. In a final attempt to keep the fishing pier alive, they extended the pier 100 feet more making the total length of the pier to 400 feet. It just so happened that, that summer the beach extended further making all their efforts fruitless.

By 1970 the city added steps to the back side of the pier (side facing the ocean), so that people could use it to walk down to the ocean. Long time North Wildwood Police Officer, Roland Bebler, took advantage of the stand at the back of the pier and opened a chair and umbrella rental stand.

After some time the pier had been falling out of shape and honestly was just an eye sore on the North Wildwood Beach. 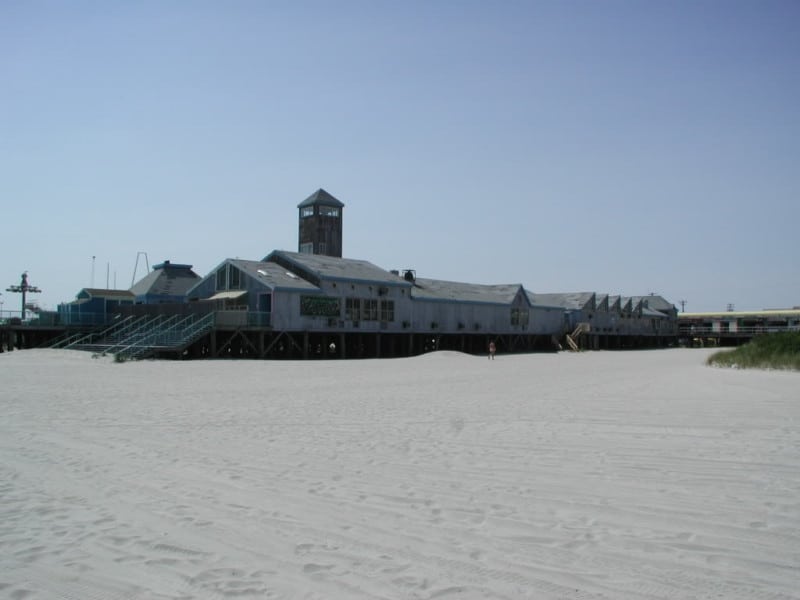 Entrepreneur, Tony Bongiovi, who was a cousin of the famous performer, Jon Bon Jovi, saw the old Ocean Point Pier as a great investment. With other business partners such as Erich Gruetzmann, the team purchased the pier in 1987, knocked it down and built the pier you see today. Of course it looks nothing like it did when it opened in 1988

In Summer 1988, Seaport Village opened with much fanfare. Built with gray buildings with blue and yellow trim, Seaport Village was made to mimic the old fishing piers of New England but with a twist, commercial retail spaces. 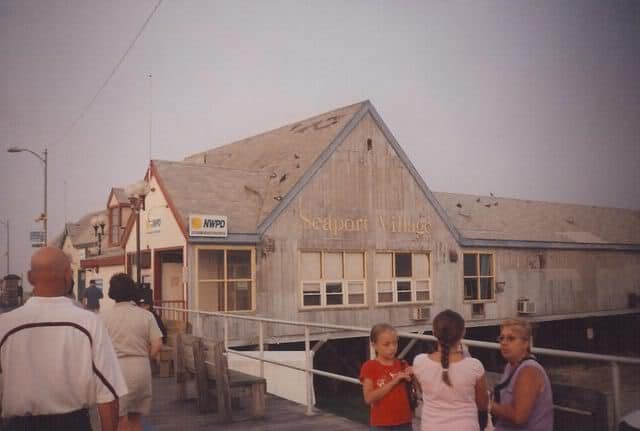 Seaport Village was different then the average stores on the boardwalk. It housed a tattoo parlor, a restaurant (C.C. Clams) two radio studios, a performance gazebo, the Wildwood famous “Candy Barrel” and electronic equipment stores.

Just to high light one of the studios called “Star Talent Studios”. This was a place where they would record you singing and make you a music video. In the video below you can see an example of what they did. 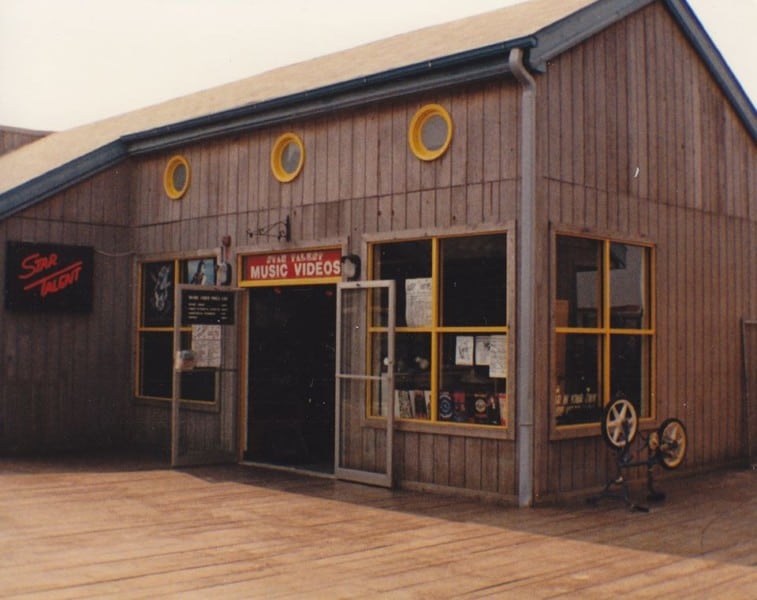 As the years went on, more and more stores kept on closing. By the end of it’s time the only really worth noting places still open were was the Hawaiian ice stand and the candy barrel. Oh and just to remind everyone of something that terrified me as a kid, who remembers the freaky looking monsters in the buildings?

2004 was the last time the pier was open. The police stayed in the front of the complex as a boardwalk hub but the pier was closed off. In 2008 the city of North Wildwood had the pier claimed as a safety hazard and hired Albrecht & Heun to knock down the New England style building for $92,642. The police placed a trailer there as their new hub and a restroom. 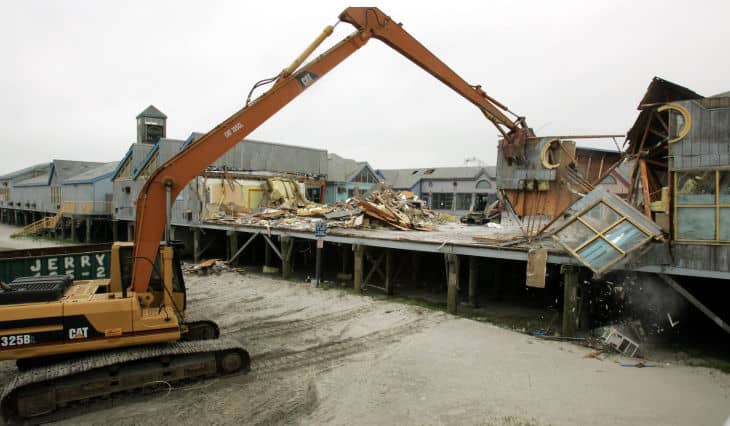 By now I know you are wondering, why hasn’t anyone tried to do anything with the pier yet. Truth this that many people have tried. It isn’t as easy as one would thing to get something moving from scratch.

In 2007 the city had a contract with an redevelopment company named “WB Resorts Development” who wanted to turn the pier into a 90,000 square foot pirate themed indoor water park. They also were going to have a 16 story tall hotel connecting it from the street side of the boardwalk. This fell though as the as the economy crashed in 2008. (NOTE: I used to have renderings of what it was supposed to look like. When I find them I will upload them)

Sadly I wish I could leave this article with a hope for the future but as of right now I do not see that hope.   I do want to know what you think about this. Below answer this one question. What would you like to see done with Seaport Village?

Thank you and have a Wild day!

Thank you for the following people and websites for the photos and information.

HistoricalAerials.com (For all the aerial photos) (They Provided them free of charge) Thank you!!!!