Are you ready to be awed and amazed by a world class master magician? If you aren’t well get ready to be!

Michael Grasso was a fantastic magician act from Season 5 of America’s Got Talent. Grasso was voted out in the Las Vegas Round but shortly returned for the Wild Card Show. He was eventually eliminated again in the late finals.

On Thursday, August 13, at, 8 pm Michael Grasso will take the stage at the Wildwoods Convention

According to his America’s Got Talent Page,

“Michael began studying magic almost 27 years ago and has since been on a personal quest to push his art to the highest level of skill and originality. He’s not about tricks. He’s about real magic. With his powerful and cutting-edge style, Michael has gained international notoriety, performing around the globe in diverse venues for crowds as large as twenty thousand.” 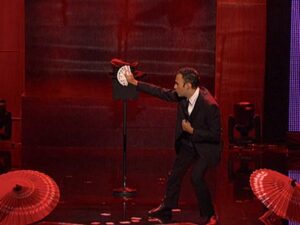 “Witnessed by millions on NBC’s #1 hit show America’s Got Talent, Grasso’s unique style of magic and illusion sprung him into the national spotlight, proving that he is indeed a true master of his art. Inspired by a golden age of magic, art, music and fashion, his performances transcend all ages and languages. Following his performances on national television, The Society of Magicians awarded him with the prestigious Illusionist of the Year award.”

Michael Grasso’s show is one night only and will be held at the Wildwoods Convention Center in the Starlight Ballroom. The show will run from eight (8)pm until nine-thirty (9:30)pm. Ticket prices start as low as eighteen (18) dollars and can be purchased through Ticketmaster at www.ticketmaster.com or by by phone at 800.745.3000. You are able to pick up or purchase tickets at the Wildwoods Convention Center Box Office also.

To watch videos of past performances, visit www.GrassoMagic.com. To find out more information about this new event jump on the he Wildwoods Convention Center’s website, http://www.wildwoodsnj.com/cc/