There used to be many different kinds of ways that people made it down to The Wildwoods. Before  it was cars, it was trains, before trains it was large wooden ships. A lot of our transportation history made the Wildwoods into the seaside destination it is today. Join me as we jump back in time and take a look at the history of the rails to the Wildwoods and see some of that history that is still standing today. 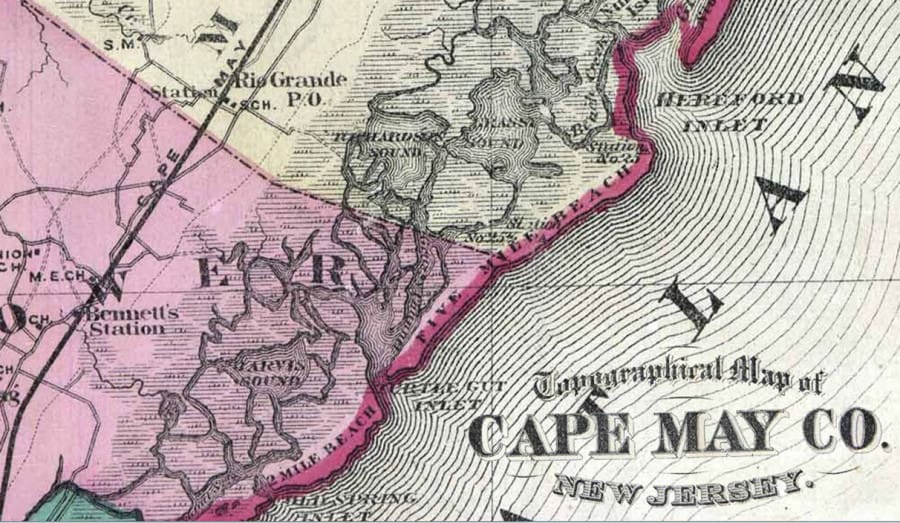 By the time 1890 came into Wildwood’s view, the only way on to the island was by swimming or by wooden ship. The borough of Anglesea had only been around since 1885 so no one thought to build railroads as a means of transportation to get to The Wildwoods by land.

To the right hand side you can see a 1890 map of Anglesea and the “5-Mile Island”. If you notice there is a rail way running through Rio Grande into Cape May City. That railway was the Cape May-Millville line built by the West Jersey Railroad in 1863. This map was completed before the rails to Anglesea were laid.

The first railway built to get people to The Wildwoods, Anglesea at the time, was in the late 1890s. It was built on top of the marsh. Workers had to pile mounts of dirt on top of each other to make a steady trail to lay the tracks on. These tracks were laid on what was called back then, and still today, “The Glassy Sound.” The junction that brought the trains from the mainline to Anglesea was the Anglesea Junction.

Due to the tracks being laid in a marsh area, it flooded often causing the tracks to move from their correct spot. This would cause the train to derail leaving the train, and it’s passengers stuck in the mud. When low tide came the crew would get off the train and re-set the track. (Kind of scary if you think about that). The train that used to run this track as called the “Mud Men.” This was due to how many times the train would get stuck in the marsh’s deep mud. These Mud Men would take the wooden Beach Creek Train Bridge into Anglesea. 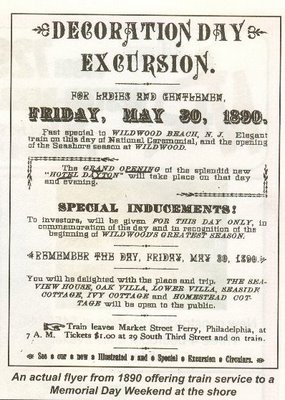 (Up above you will see the original poster for the first day the train’s started running from Philadelphia P.A. to Wildwood. Just like how we start our summer off with Memorial Day Weekend, so did the trains. [I wonder if there is a connection.]) At this point tickets were only one dollar for a trip down to Wildwood. (You can’t even buy one thing in a dollar store for a dollar) [Hint Hint Hint: Taxes] 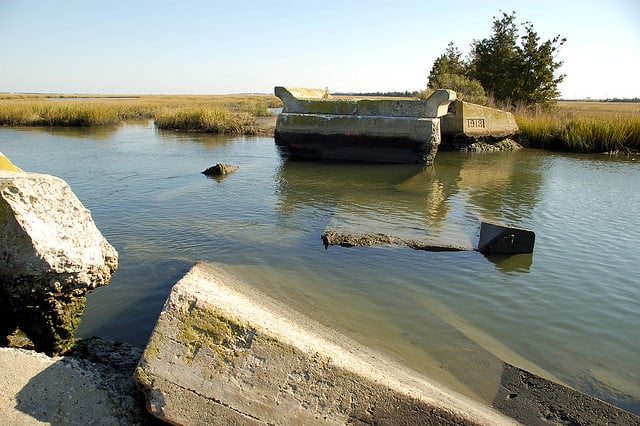 Today of course we are able to see the remnants of this original trail through the Glassy Sound. Most of the concrete bridges that were completed in 1918 have collapsed but they are still visible. The rail’s themselves are gone and were scrapped in the 1990s. [That of course we will get into towards the end of this article]

This of course wasn’t the only way the trains came into The Wildwoods. 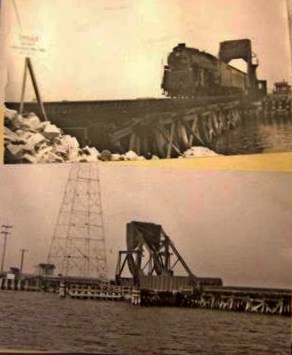 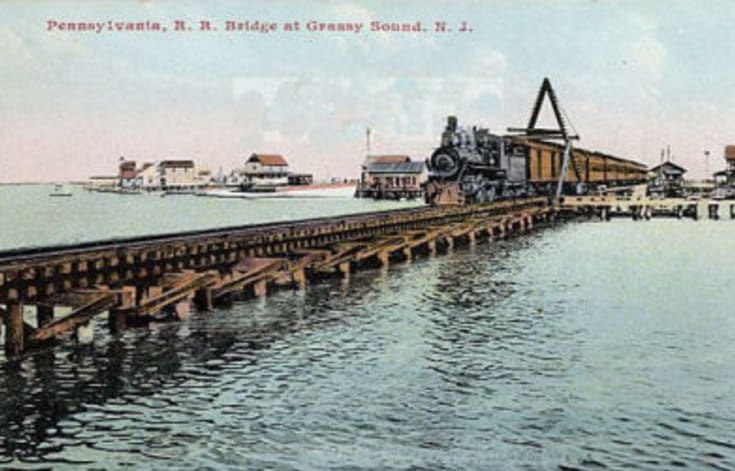 the Oak Ave station. This bridge was called the Grassy Sound Bridge. This bridge was wooden and only lasted until 1912 when it was replaced by a metal bridge in 1913. (This is the bridge that is mostly destroyed today at the top of West Wildwood). 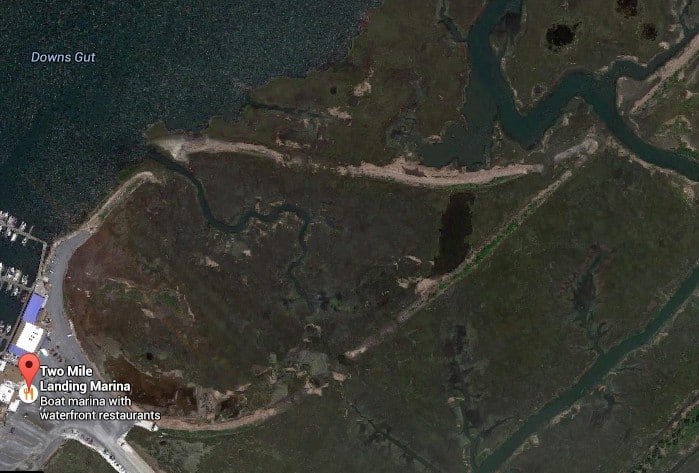 One cool interesting fact about the end of the line. For those who love to eat at the Two Mile Landing, did you know that was where the trains used to make their loop? Next time you’re at Two Mile Landing take out Google Maps and zoom out and you will see a big loop in the marsh. (posted to the left is a Google Map photo of what the loop at 2 Mile looks like now. Part of it is the parking lot)

In 1908 when Ford’s Model T car was first introduced no one would have thought that the car industry would take down the giant business of trains in the Wildwoods.

By the early 1920s the West Jersey and Seashore lines were having a great decline in ridership due to the cheaper prices of the car. At that time a Ford Motel T would only have cost you around $600. This is roughly $14,240.16 in today’s money. (A good price for a brand new car)  This rivalry for supremacy over transportation was being won by the car or bus.

To try and save as much money as possible, The Pennsylvania-Reading Seashore Lines stopped service to Anglesea and it’s stations from the Anglesea Junction to Wildwood’s Oak Ave station. The track that ran down New Jersey Ave from Anglesea was removed and the road was made bigger so that were would be more room for cars. This helped save money for Penn-Reading RR and allowed them to keep the Crest track (from Oak Ave to 2 Mile) open for passenger service until April 27, 1958. After that track was abandoned later on in 1958, the rails were removed and the roads made bigger.

At this point the only section of track that was open was from the Wildwood Junction to the Oak Ave train stop. This track was mostly used for cargo and freight until June 6th, 1974 when the last train ran out the island and back towards Philadelphia. This is the last time Wildwood ever saw a train on the island.

A private company purchased the tracks in 1977 and purchased it with the agreement of ripping up all the tracks and the taking down of the Grassy Sound Moveable Bridge. The company did everything they were told to do but ran into a problem. The crane that was purchased to do the heavy lifting had been placed incorrectly and fell straight into the bay. The company didn’t have enough money to buy or salvage the crane and decided to leave it as it is today. Funny thing is that they still never removed the crane or the bridge. Over time the bridge fell apart and laid on the bottom of the waterway.

While spending countless hours doing research I was able to find government paperwork, articles or some kind of work permits for the demolition of all of the stations, tracks and bridges but was unable to find one for the Wildwood Junction. After speaking to a few Wildwood historians I found out that the Wildwood Junction was never taken down for reasons unknown.

Being an urban explorer and a devoted Wildwood historian and enthusiast I knew I had to find it and film it.

Below is my video of finding The Wildwood Junction.

Who knows how the generation of the future may come to Wildwood. With changing technologies and sciences maybe the roads might become as abandoned as the rails are today.

Thank you for reading.

Check them out at:
3907 Pacific Avenue
Wildwood, NJ 08260
Maps by Rutgers Special Collections and Archives
Junction drawings by broadway.pennsyrr.com