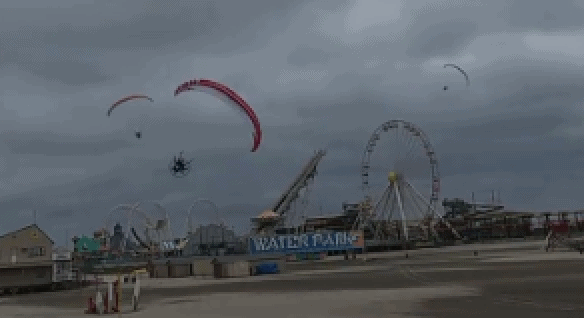 Multiple reports of a Small air-craft crash in Wildwood have been reported to us. Sirens were first heard around 1:30pm today on the beach at Youngs avenue after a Paramotor crashed.

A Paramotor is a generic name for the harness and propulsive portion of a powered paraglider. It works by attaching a parashoot to a motor/backpack. You get launched via a running start and a gust of wind.

Emergency services were called and the paramotorists was taken to AtlantiCare Regional Medical Center in Atlantic City.

Here is the police report below.

On Saturday, October 6, 2018, at approximately 12:42 P.M., members of the Wildwood Police Department Uniform Patrol Division, Detective Division, and Wildwood Fire Department responded to the area of Spencer Avenue and the beach for the report of motorized paraglider that had crashed on the beach.

During the preliminary investigation, a white male was located strapped into the paraglider seat, which was laying on its side in the sand. Wildwood Fire/Rescue arrived on scene and began treating the victim. The victim was transported to AtlantiCare Regional Medical Center in Atlantic City for further treatment.

During the developing investigation, multiple witness statements were secured. It was learned that while flying the paraglider over the beach, the victims’ parachute became tangled and collapsed, causing the victim to fall approximately 30-40 feet to the ground below.

Below is a video of the paramotorists flying near Youngs Ave.

Surfside Pier Is Getting Winterized