The N. Wildwood Jetty From The 70s That Never Happened

The below story is written by PJ Hondros. Be sure to to follow North Wildwood Coastal Processes for other historical information about our coast line.

“Humans protecting their assets is not a new thing, we’ve been doing it for centuries. So, when North Wildwood was inundated with wicked storms in the 50’s and 60’s, the government stepped in.

In March of 1962, a fierce Nor’Easter hit South Jersey. Dubbed ‘The Ash Wednesday Storm’, it brought a 10.5’ tide to North Wildwood. Nothing of that magnitude had ever been recorded before. Buildings burned down, the bay met the ocean, and the damage was in the millions. The incredible damage forced the Federal Government to be proactive, and begin to seek solutions, but none came.

By 1965, Cape May Harbor was being used increasingly more frequently, and as a result, it was determined that by maintaining the Hereford Inlet as an intracoastal waterway, travel by boat would become more efficient in the area. Additionally, the dozens of shipwrecks over the years added to the Federal Government’s pressure to stabilize the inlet. 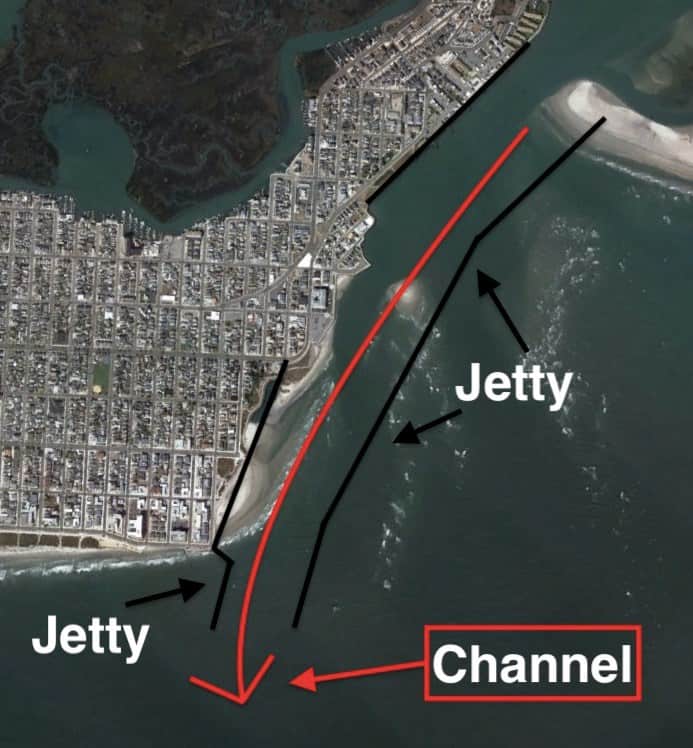 The N. Wildwood Jetty From The 70s That Never Happened

By 1970, enough pressure had mounted that the United States House of Representatives passed HD 94-641, securing funds for an official study. Two years later, the findings of the study were published. Titled “Hereford Inlet to Cape May Canal to the Delaware Bay”, the report would be the first of its kind to recommend such drastic measures.

The report called for the following:

• A 400 foot stone extension of the 2nd Avenue jetty

The cost of this project would exceed One-Hundred-Million Dollars. However, the residents of the Wildwoods weren’t exactly open to the idea, and for good reason. On August 21st, 1973, a protest broke out on the Toll Bridge that connects North Wildwood to Stone Harbor, when government officials and engineers were touring the soon to be construction site.

“William Layton, an engineer with the State Department of Environmental Protection’s office of shore protection, was explaining why the state hoped to follow a recommendation by the Army Corps of Engineers to build two long jetties on either side of Hereford Inlet. ‘There’s a constant drift of sand from north to south,’ said Mr. Layton, ‘resulting in a natural migration of inlets. But there is no littoral drift of sand across Hereford Inlet.’”

Though a smart man, Layton was later proved to be wrong. This was a time before advanced computer models existed. When I ran a simulation on X-Beach, the twin jetties caused massive erosion on North Wildwoods oceanfront, to the point in which JFK Boulevard was completely swallowed up.

Some residents also recognized this. Even the Mayor was outraged. “It seems to me this jetty’s going to take away our beaches, then we’re going to pay to bring them back,” Mayor Muziani said. When told that if Congress approved the project, the state and local communities would have to contribute a share, he replied, “I can tell you right now, you’ll never get it from Wildwood.”

Mayor Muziani was correct. By building jetties, the Hereford Inlet wouldn’t have been able to carry sand over to North Wildwood, where it would ultimately move to Wildwood and Wildwood Crest. This would have ensured a perpetual cycle of costly replenishment that would’ve lasted forever. The erosion caused by the jetties would’ve been equivalent to the rate of erosion we’re seeing today, but it wouldn’t of been cyclical.

In 1976, approval for the project had hit rock bottom, and local towns were not willing to help foot the bill. With cost rising, and public approval plummeting, the project was finally scrapped in 1978. The Department of the Army issued a statement shortly after: “The plan, as presented in HD 94-641, could not move to Phase 2 due to an exceptionally high cost.” In other words, they came to their senses.

This was not only a win for the taxpayer, but a win for the environment. Had the plan gone forward, our beaches would’ve been stuck in a perpetual state of erosion, and the inlet beach would have never reformed into the bird sanctuary it is today. Ultimately, the failure to construct the project was a win-win.”

Check out these other Wildwood videos and articles

Atlantic City Electric To Use Helicopters In Wildwood