UPDATE brought to you by Nick Pittman 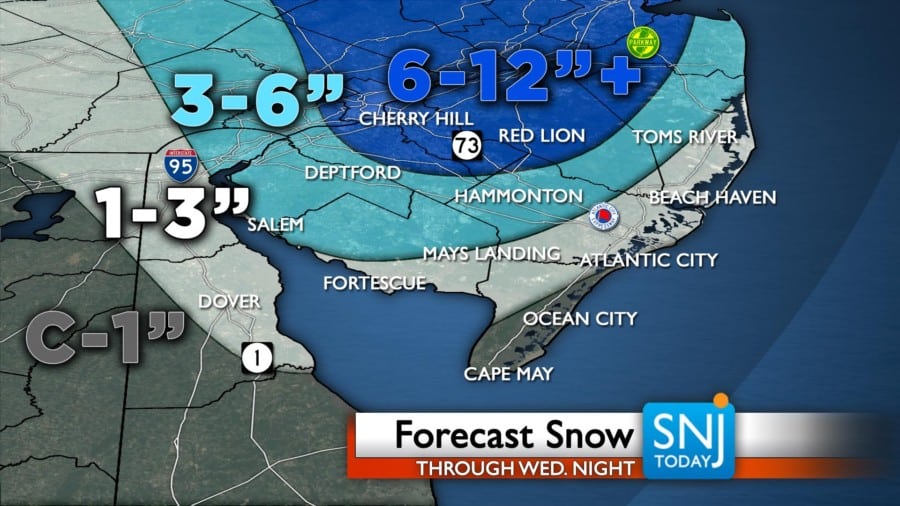 It’s no government secret, there’s uncertainty as to just HOW MUCH snow will fall in our region with this upcoming storm. Why? It’s all about TRACK, TRACK, TRACK. You’re going to see maps all over the place from tonight until tomorrow night. Truth be told, I’m not a fan of jumping on the bandwagon. I’m keeping my totals lower than most because there are variables that need to be figured out. Alright so the options are:

1. West Track – Models yesterday were picking up on this idea that the low would hug the coast bringing with it a WARMER solution meaning more rain and farther north and west. This equates to less snow. If this track came to fruition we’re looking at very little to northing east of Hammonton. 1-3″ through Central Cumberland to Hammonton into Southern Ocean and 3-6″ north and west of there.

2. East Track – The new trend began late this morning / early afternoon with the EURO model taking a sizable step east. The NAM followed positioning the heaviest snow in Central NJ but still a decent amount down through Western Atlantic, Cumberland and Ocean. In this scenario we’d still see some rain, but the flip over to snow would be faster and farther southeast.

Unknown variable: How much dynamic cooling occurs? How fast can we get the precip to fall?

I’m LEANING more towards the easterly track as it stands right now. In addition to the snow, we’ve got some HEAVY rain at the coast with winds that will gust to over 45mph, decreasing farther west. We’ve also got the chance for minor flooding through Wednesday PM.

IF you’re flying out really early Wednesday from Philly or New York, you SHOULD be OK. If you’re traveling home, you’ll want to get back BEFORE 2pm.