The Yacht That Sunk In Wildwood

In some of the Wildwood message boards we have been talking about an old schooner yacht that had sunk in Wildwood in late 1963. I had briefly heard stories about the ship but wasn’t alive to see her. Any kind of shipwreck intrigues me and because it happened in Wildwood it caught my attention. Step back in time as we discuss the schooner, “The Atlantic” and how this world record holder yacht found herself in a watery grave at the bottom of the Yacht basin in Wildwood. (note: we have videos and pictures through-out) 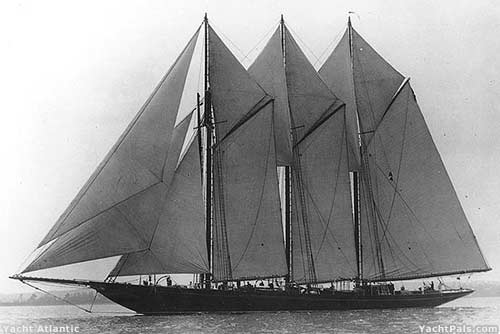 In 1903 yachtsman, Wilson Marshall, awarded naval architects, Townsend and Downey, a million dollar contract to build The Atlantic. (One million dollars in 1903 converts into $25,606,572.96 in today’s money). Built at Shooters Island in Kill Van Kull (Staten Island), The Atlantic was built for Marshall to race with the New York Yacht Club. When finished The Atlantic ending up being over 184 feet long with three masts and weighted 303‐tons.

(Above to the left is a photo of the completed Atlantic)

By late 1904 The Atlantic was sea worthy and Marshall and his crew started training for Emperor of Germany’s yacht race called  the “Kaiser Cup.” The race was 3,104 mile ocean race from Sandy Hook, N.J., to Cowes, England. 10 schooner yachts built like The Atlantic race against each other to see who could make the trip the fasted. 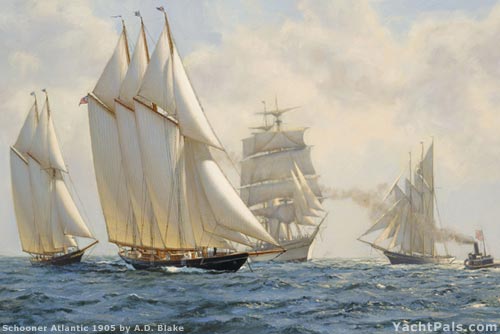 In the long haul, The Atlantic, wont the Kaiser’s Cup and broke the recorded for the fastest time. That time was 12 days, 11 hours and 1 minute, which is a record still held today. (To the left is a photos of the Atlantic with three other schooners racing for the Kaiser’s Cup) 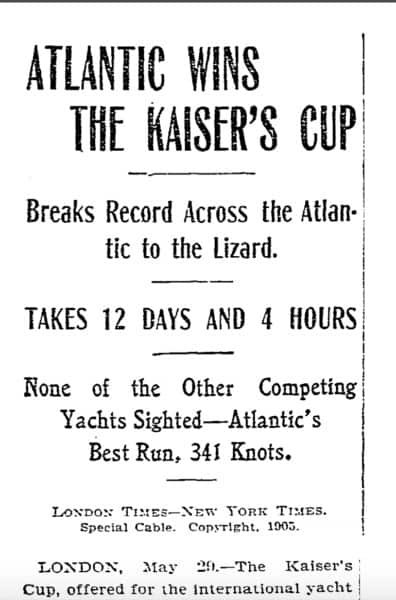 During World War I The Atlantic was donated to the U.S. Coast Guard to help train new members in water saving techniques. Then in 1941, she was used once again by the Coast Guard to patrol the United States coast to lookout for German submarines. By the 1947 she was decommissioned and sent to United Boat Service Yard at City Island in New York to be sold but she never was. After sitting for years with no buyer, the UBSY decided to sell her to a Delaware scrap yard.

Ward Bright, a yachtsman from Wildwood,  saw the boat at the scrap yard, and decided to purchase her in 1953 and bought her in Wildwood. Once in Wildwood, Bright fixed up The Atlantic and made her into a floating tea room at the marina next to the George Redding Bridge. Many of which could see her masts as they drove into Wildwood. 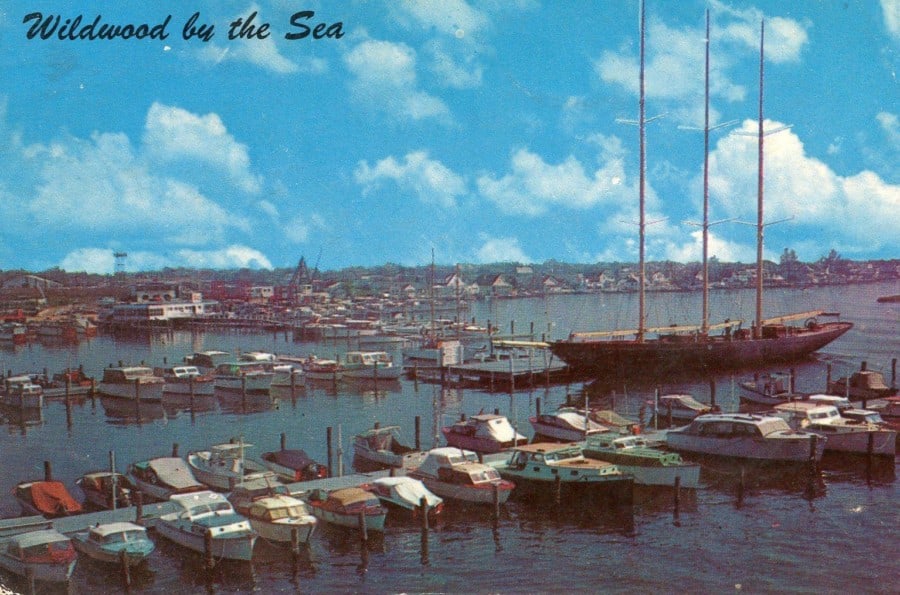 (Note: I have been told that she became a gift shop for Uries but I couldn’t find any photos, articles or evidence to support this) (The picture above is undated but shows The Atlantic in port in Wildwood) 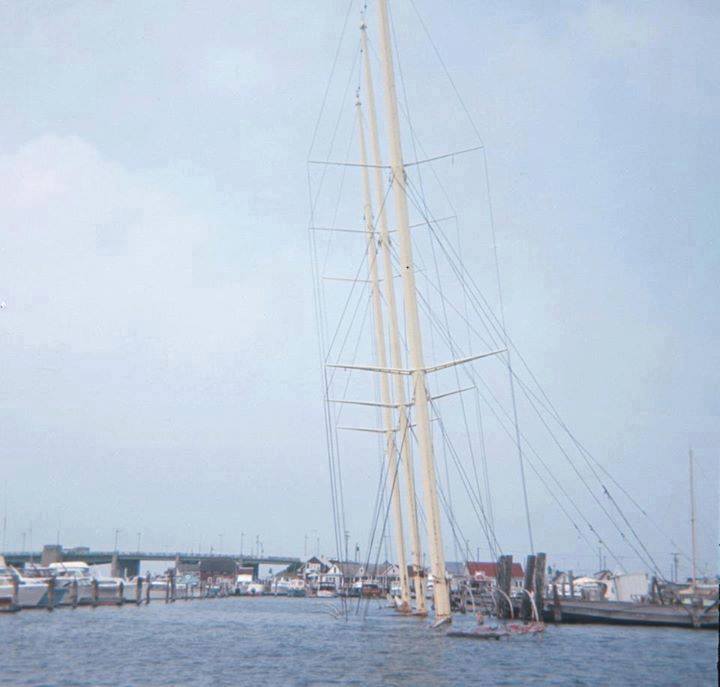 In the late 1950s she was ripped off her moorings and damaged. Bright didn’t have the money to fix her and due to neglect, she sank on December. 5, 1963, in 30 feet of water during a storm.

(To the right is a photos of the Atlantic completely underwater. The only part of her out of water were her masts. You could see the masts on your way into Wildwood)

Here is a quick video of what The Atlantic looked like in the 1970s under water. You can see her three sails out of the water. The video is poor but you can still make it out.

She was refloated on May 2nd 1969 but sunk again in 1973. At this time Genero Santos purchased the yacht and after several weeks she was reflected once again by a salvage team. Santos had envisioned The Atlantic to be sail training ship.

Everything was going well until a passing ship made too much wake. The movement of the wake caused one of the ship’s masts to come crashing down on the docks. Within a few days the ship sank for her last time. 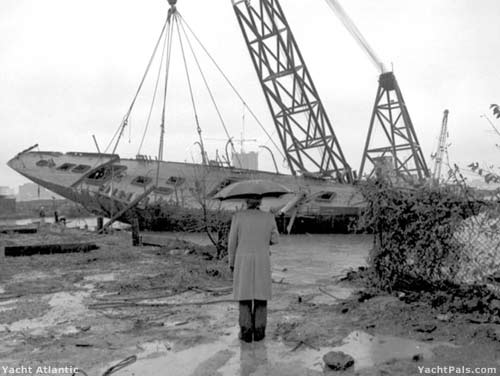 For one last time the ship was purchased and refloated, but this time she was scraped at a yard in Virginia.

(Right is a picture of the Atlantic being ripped from the water for the last time.)

The only thing that remains of The Atlantic is the rudder that is currently in the Museum of Yachting in Newport, Rhode Island.

I hope that you enjoyed our article. If you have any photos, videos or stories about The Atlantic feel free to email us at wildwoodvideoarchive@gmail.com

A special thank you to the NY Times for the 1905 article on the Kaiser’s Cup.

Also thank you to Scott Hand for some photos.

Check out our other trending article, 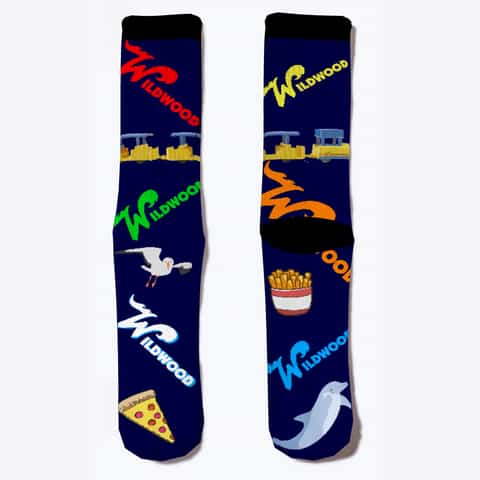