Wildwood is a place of many things such as fun, sun, and memories but one thing that is even more special then all that is Love. For a lucky few, that summer love that was only supposed to last the one summer blossomed into a beautiful relationship.

Last week we brought you a video taken from outside Harry’s Corner on the Wildwood Boardwalk. This week I am glad to say that we have the exclusive story about the engaged couple.We also have the official video for the proposal below.

Editor’s Note: If you were engaged in Wildwood, married in Wildwood, or even met the love of your life in Wildwood, we want to hear your story! Please email us at wildwoodvideoarchive@gmail.com . Make sure to title your email in the subject box, “Wildwood Wedding Story”. We would like to feature a new couple every six (6) to ten (10) days.

July 28th 2015, was just an ordinary day for most of us but not for Frank Surace. He was cooking up a proposal that his girlfriend, Tiffany,  could never forget. We reached out to Frank and got the full story. Frank called it his “brief story of how struggle and heartbreak miraculously turned into triumph and true love”.

Frank grew up in South West Philly, with his Mother and Sister. His father was killed in a home robbery when he was 14 years old which led them to move to Mullica Hill New Jersey. Without a father to guide him Frank got into bad habits. After graduating high school he was moved in and out of treatment centers to find the help he needed. It wasn’t until Frank’s almost fatal car crash when he realized he really needed to clean up. His car went flying off a hill and was crushed in half. That day his father was with him.

While clean and sober in Tennessee he met Tiffany.  To quote Frank:
“Tiffany is very loving and has a huge heart. She is so beautiful that I was instantly attracted to her. I knew from the minute I met her I had someone special. I knew she was beautiful inside and out!!! So coming from someone who had no hope, now I have all the hope in the world!”

Since that day they have been inseparable. When they first starting hanging out they would watch videos of the flash mob proposals. She was in love them she would tear up watching them! He knew that was how he had to propose to her. Also it just so happened to be that both of their favorite song at the time was Bruno Mars’ “Marry You.”

They have three children together. “Frankie and Nicky are ours together and my stepson Aiden who I look at as my son.. I love him like my son plus he calls me daddy.”

Planning and practice for the proposal took over two months. He hired a Dj (Dj Expo), 30 dancers from a high school dance school, and paid to have her father flown up from Florida. While he was doing all this he had to keep it all a secret. Which as any guy can contest to, it is one of the hardest things in the world to do!

The night of the proposal they were going on the boardwalk to “Watch” the fireworks with his sister. AS they were walking to the other side of the boardwalk, he gave the sign to start the dance. As the 30 dancers started dancing they stopped to watch. Little did Tiffany know she was in for a big surprise. She said to him, “Aww babe, look! This is so cute. It reminds me of when we first met.” Frank said that he was so nervous as he stood there and waited for his time to jump in to join the dancers.

When it was time, he kissed her on the check and jump in to dance. Frank said, “ I got nervous and forgot my dance.” Below is the official proposal video! Give it a watch!

“I love Tiffany with all my heart she is my light my rock and my everything! Even though my fathers not here I see him through the eyes of my children. Even though I made mistakes I would never regret them because they made me stronger and I would have never met Tiffany!” 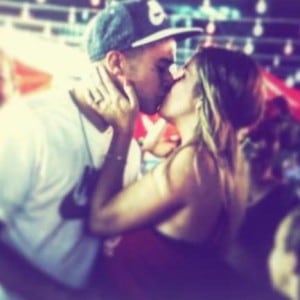 Here’s a special note from Frank to all those who helped:

“Thank you Wildwood, New Jersey!  I spent so many summers here as a kid and everyone from the mayor to the firework staff, the Wildwood police and the pizza shops on the boardwalk. You all did everything to help me make this dream come true. Thank you”

If you were engaged in Wildwood, married in Wildwood, or even met the love of your life in Wildwood, we want to hear your story! Please email us at wildwoodvideoarchive@gmail.com . Make sure to title your email in the subject box, “Wildwood Wedding Story”. We would like to feature a new couple every six (6) to ten (10) days.