Before you read please take a minute to remember those who fought in World War II and  also those who lost their lives on the merchant vessels that were sunk off our coast from German U-boats.

Just like every big and small city in the United States, Wildwood by the sea felt the grips of World War II. Rations, bombing drills and blackouts were the consequence of living in a world of fear. Japan bombing Pearl Harbor hit too close to home and woke up the sleeping giant called the United States of America.

During these war condition times, December 7th, 1941 to September 2, 1945 , Americans lived in a state of hysteria thinking that the Germans were coming. While others thought Germans could invade any day, the community of Wildwood already knew they were here.

Join me as we go back in time to see what went on in Wildwood during World War II including a video of the captured German submarine off the coast of Wildwood and Cape May brought to you by The Navy National Archive.

In preparation for America to go to war, the government put rations on products. This meant that you simply couldn’t walk into a supermarket and buy as much meat and sugar as you wanted nor could you get a full tank of gas every day. 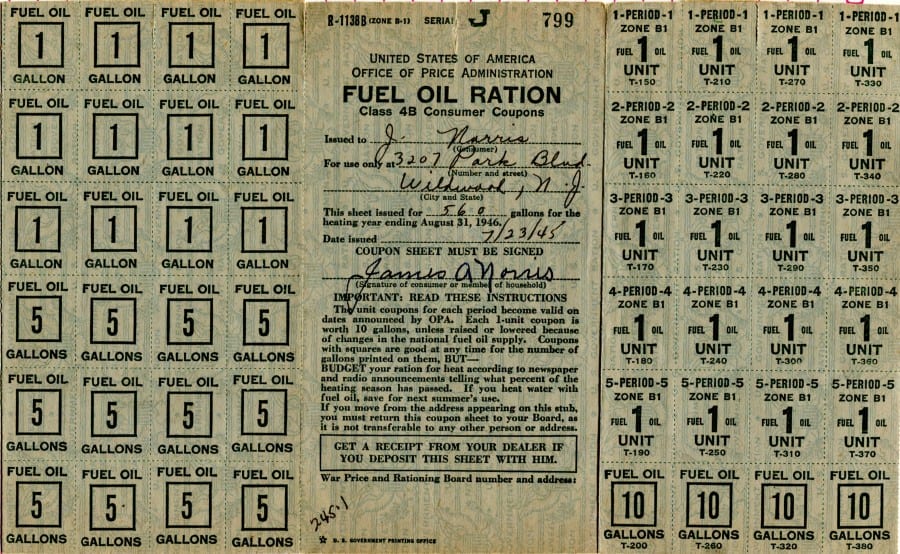 These and more were rationed so that you could only get a small amount. Our government issued stamps, coupons and buttons for various products in an attempt to keep people from hoarding the items. Not only did you need the ration cards, it listed it to a certain amount. There were also meat-less days.

Gas was rationed not so much because it was scarce, but rather because rubber was scarce. Due to the German U-boats cutting off our supply route, rubber had to be brought in from South America. There were different kids of gas ration stickers: “A” for 3 gallons, “B” for 4 gallons and higher, and “C” for unlimited.

In Wildwood it was hard to come by gas. You had to either have a connection or you knew someone at one of the fishing piers that would charge you double the amount for gas. One interesting fact is that gas was only rationed for cars/buses but not for boats. In Wildwood you could get as much gas as you want from the fishing piers.

Drills were also a big part of preparing for war. Wildwood had quite a few a week. In Wildwood High School there were air-raid drills. This kind of drill was announced over the P.A. system and the students would crunch unthread their desks or huddled in the hallway to get away from the glass windows.

At night there would be black-out drills. A black-out drill sounds just like it was called. Every single light in Wildwood would have to be shut off or have the windows blackened so that no light could get out. During these blackouts even the amusement piers and the boardwalk had to shut down their lights.  Picture this: Sirens sounding, air-raid wardens with steel helmets patrolling the streets, and cars buses stopped in their tracks. Scary right?

The Wildwood Local Defense Council would run an Public Service Announcement in the newspaper like the one below. 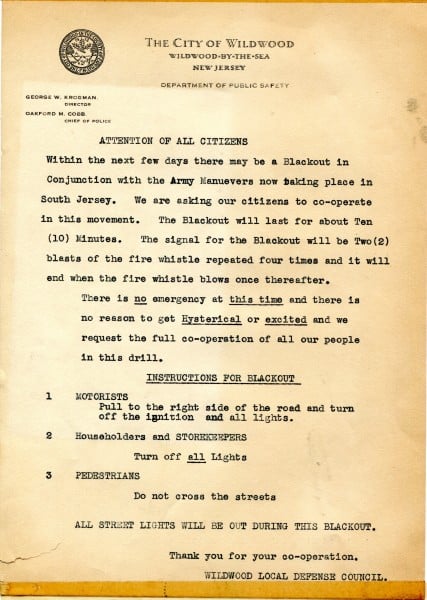 If you broke any of these rules during a black-out, an air-raid warden would report you. X amount of reports and you could get sent to appear in court.

Some of the rules were; motorists having to pull to the right side of the road and turn off their lights and ignition, house owners and store keepers had to turn all of their lights off, and lastly, pedestrians had to stay were they were and not to go outside for any reason(This was due to there not being any street lights on during the blackout drills.

Of course all the black-out drills were for good reasons. Reason one was due to surprise air-raids by Germans and reason two was because German U-boats only sunk ships during the night so if you took away the lighted coastline it would make it harder for the Germans to know where they are.

What is interesting is how paranoid everyone was that the Germans were going to come ashore or attack the shore as they should be.

To help keep our coastline safe and secure, the United States government built a defense system known as the Harbor Defense of the Delaware system. This defense was made up of 15 lookout towers that ran from North Wildwood NJ down to Bethany Beach Delaware. With these towers in place, they were ready to spot any German ships trying to make their way up the Delaware Bay towards Philadelphia.

These towers were built like concrete bunkers with reinforced concrete walls with iron. These Fire Control Towers were made to take direct hits from the air. Think of these towers as the place you wanted to be incase of an attack.

Now what I have heard from Wildwood historians but hadn’t found concrete proof on was the fact that these towers had a long cable that would run from the tower 3 miles out to sea that would help track German U-boats. A few report that when storms, such as the 1944 Great Atlantic hurricane, would pass, these cables would be un-earthed on the beach. When this happened, undercover Army core of engineers would be there next day to put them back in their place. As I am also told, when people would approach the undercover engineers, they would point them down the other side of the beach.

I will be honest and say that this could be a true story based on what was used in Delaware’s Fire Towers and the technology of the time. I like to stick to facts I find in books so right now lets just say this is speculation.

Both of the Wildwood Fire Towers were destroyed. One in November 1972 and one around 1998. If you ever want to see what one looked like, check out the last fully standing one in Cape May. There is another one in Cape May but it is currently apart of the Grand Hotel and you can only see the top of it. 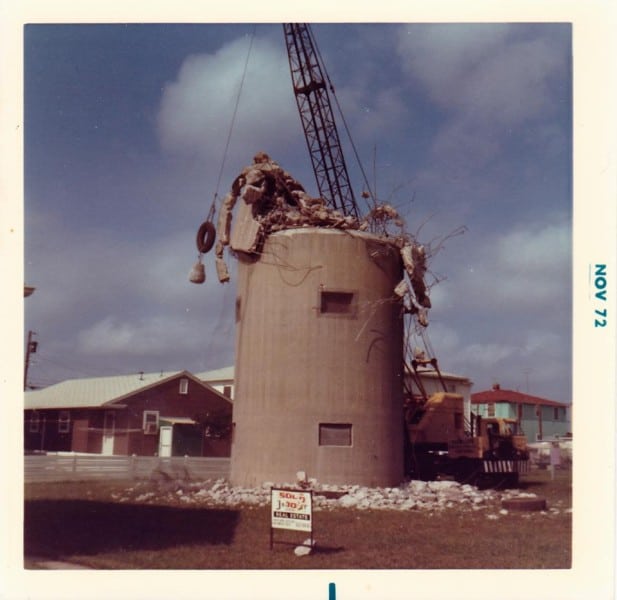 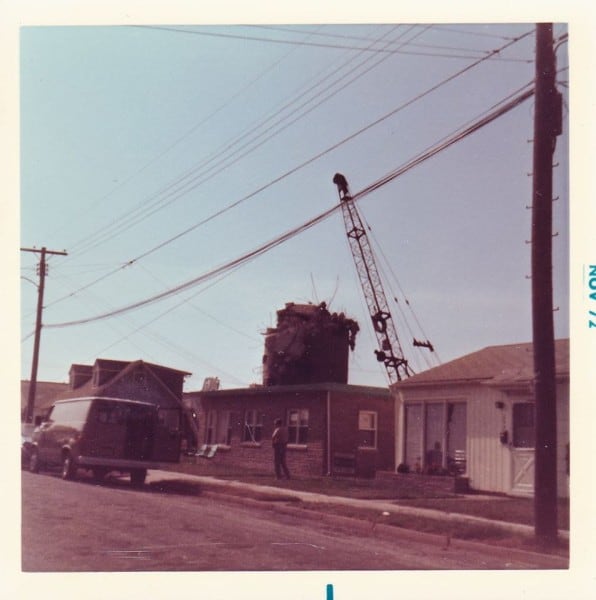 Of course, the number one thing one everyone’s mind at this time was if there were German U-boats off the coast of the Wildwoods. To put it simply, yes. According to many Navy reports, by the end of the war the U-boats had sunk 2,775 U.S. ships from Boston to South Carolina. Most of these ships were merchant ships.

In order to try and stop the sinkings, the navy loaded merchant ships with guns and taught the crews how to fire them so that they had a fighting chance against the Germans. But this didn’t always help. The Germans were sly and knew to sink the ships at night when they were unable to see out in the ocean.

During the summers of 1941 – 1943 loud explosions would be heard at night only giving Wildwood residents to speculate that a ship had been torpedoed. Their speculation would give them an answer in the mornings following as parts of merchant ships would start making their way onto the Wildwood beaches.

To your right is a picture of a part of the ship, “Lemuel Burrows” that washed up on the beaches of North Wildwood. On March 14th 1942, she was struck by German U-404’s torpedoes and was sunk. Twenty crew members perished in the wreak.

Here is something very interesting that I had to add in this article. Take this information as you want because I didn’t believe it when I heard it from a source so I reached out to confirm this information directly.

Boats in Wildwood weren’t allowed to go far out into the ocean. The farthest that you could is within sight of the shore lines. This was for their protection as U-boats patrolled the waters and hunted for ships. To most Americas, being near any kind of Germany U-boat was scary business because they were scared to be sunk. That wasn’t the same kind of feeling fisherman got on the smaller boats. According to legend German U-boat crews would often trade with local fishermen from Sea Isle and Wildwood for fresh fish.

To confirm this story I reached out to one of the oldest fishing seafood market I could think of, Mike’s Seafood in Sea Isle City. Mike Monichetti is a third generation fisherman after his grandparents, Lodovico and Rosina Monichetti, started a finishing business on the island in 1911.

Unfortunately Mike was sick and was unable to comment but his long time business partner, Brian Emery, confirmed it saying that he has heard Mike telling stories like this one a couple of times.

German U-boat, U-858, was sent over from Germany under Hitler’s orders for “Operation Drumbeat.” This operation was the same operation that U-404 was operating on which was to sink as many merchant ships as possible. 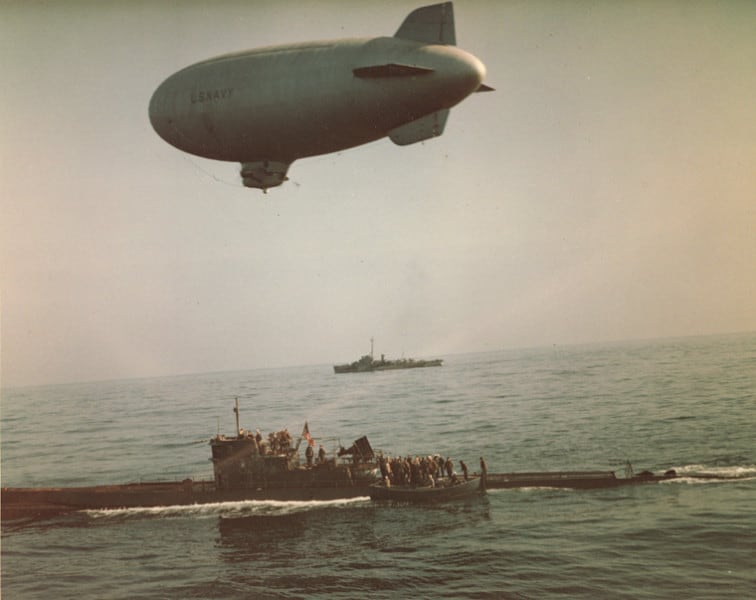 Deciding not to go back and take the dangerous trip back to Germany, the crew contacted the US and gave their position. The next day the US Navy met with U-858 and overtook the shipping bringing it closer to land towards Cape May.

Due to all the media covering the event, there are hours of footage and hundreds of photos. I reached out to the Navy National Archive and obtained some of the video. Check it out below

This comes to show how close the Germans were close to us. It is crazy to think that this really happened and the drills, preparation and  fire towers were all necessary to keep us safe.

Thank you so much for reading.

Please share with your friends and family. This took me about two months to complete.

I would like to send a big thank you out to the following people and organizations who helped me in obtaining stories, photos and videos.

Robert Heinly from Cape May MAC