Atlantic City Once Had Tramcars

By now, most of us are used to The Wildwood Boardwalk being the only place in New Jersey where you can hop on a tram car and head up and down the boardwalk but that wasn’t the case.

In our Facebook Group, “Wildwood talk” someone shared a photo of a strange looking tramcar on a boardwalk from the 1960s asking if it was from Wildwood.

Atlantic City Once Had Tramcars

This futurist tram car caught our attention and so we decided to go digging to see where this tram car came from and where was it operating at.

As you may know, or not know, our World famous tram cars are really World famous. They made their debut at the 1939 New York World’s Fair. Here the tram car was sponsored by GreyHound and moved people all around the fair. Below you can see a video of the tram from the 1939 World’s Fair.

After the 1939 New York World’s Fair the trams made their way down to Wildwood where we know and love today. These other Greyhound tramcars were not seen in any video or photo from the 1939 World’s Fair.

With the success of the original tram cars in 1939, Greyhound decided to sponsor two new kinds of tramcars that would look futurist. These tram cars would be called the Greyhound Glide-a-Ride and the Greyhound Escorters.

The Glide-a-Ride was a sixty-passenger, three-coach, open-air tractor-train running on electric power. These were to move people around the fair to give them a tour in groups. 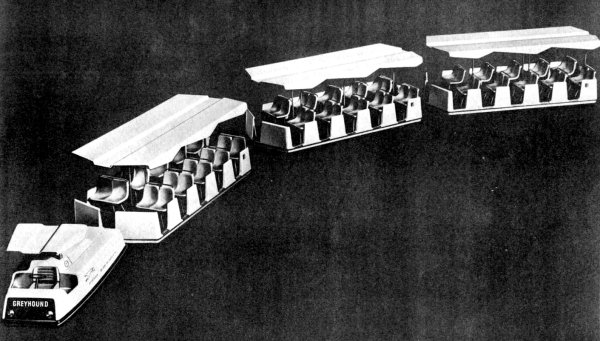 The Escorters were a more private tour compared to the Glide-a-Ride. It seats up to four sight-seers comfortably placed right up front where no obstruction can ever interfere with the view. Behind them sat a smartly uniformed, highly trained and informed driver-guide, who told his guests what they are seeing. 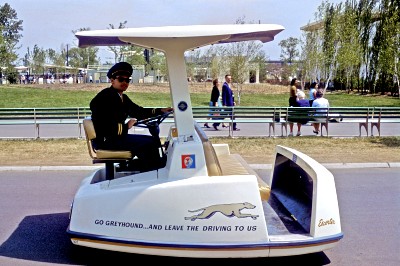 Rides on the Escorters were quite pricy for the time. According to the New York World’s Fair Marking Letter from Sept 13th 1963, the prices were; engaged as a taxi on a meter basis, or by the hour or day, and its cost will be $9.00 per hour for two passengers, with a surcharge of $1.00 for each additional passenger up to four (surcharge applies on the first hour only). The Escorter may be used for 20 minutes at a minimum charge of $3.00 for 2 passengers. For eight (8) consecutive hours a special rate of $70.00 for the vehicle and driver-guide will apply. Long term leases for a month, one season, or both seasons are available by special arrangements. Below is a video from the 1964/65 World’s Fair showing the Escorters and Glide-a-Ride.

When the fair closed on October 17, 1965, the Glide-a-Rides and Escorters were put up for sale.

Atlantic City saw the popularity of the Tramcars in Wildwood and at The World’s Fair and so they decided to cash in on the Escorters.

Interestingly enough, electric motor cars were already in use on the Atlantic city boardwalk since the 1940s. By the time the 1960s rolled around most of the rolling chairs, which were introduced on the boardwalk in the 1880s, were starting to disappear and were being replaced.

In the summer of 1967 the Atlantic City tram car made it’s debut. These cars would run on the boardwalk until the early 1980s. By 1984 the nostalgia of the old push straw chairs came back.

Then the city was ready to purcahse new trams due to the batteries starting to go, the public demanded the old push chairs thus the end of the Atlantic City tramcars.

An electric tram car wouldn’t be seen on the Atlantic City boardwalk until 2015 when the new seven person tram would be introduced.

I hope you enjoyed our article. Feel free to check out these other Wildwood Tram Car articles below!