Explaining Why The Wildwood Beaches Are So Big

This article come from our friend PJ Hondros who studies our beaches. Be sure to follow his Facebook page, North Wildwood Coastal Processes for more of his awesome content. 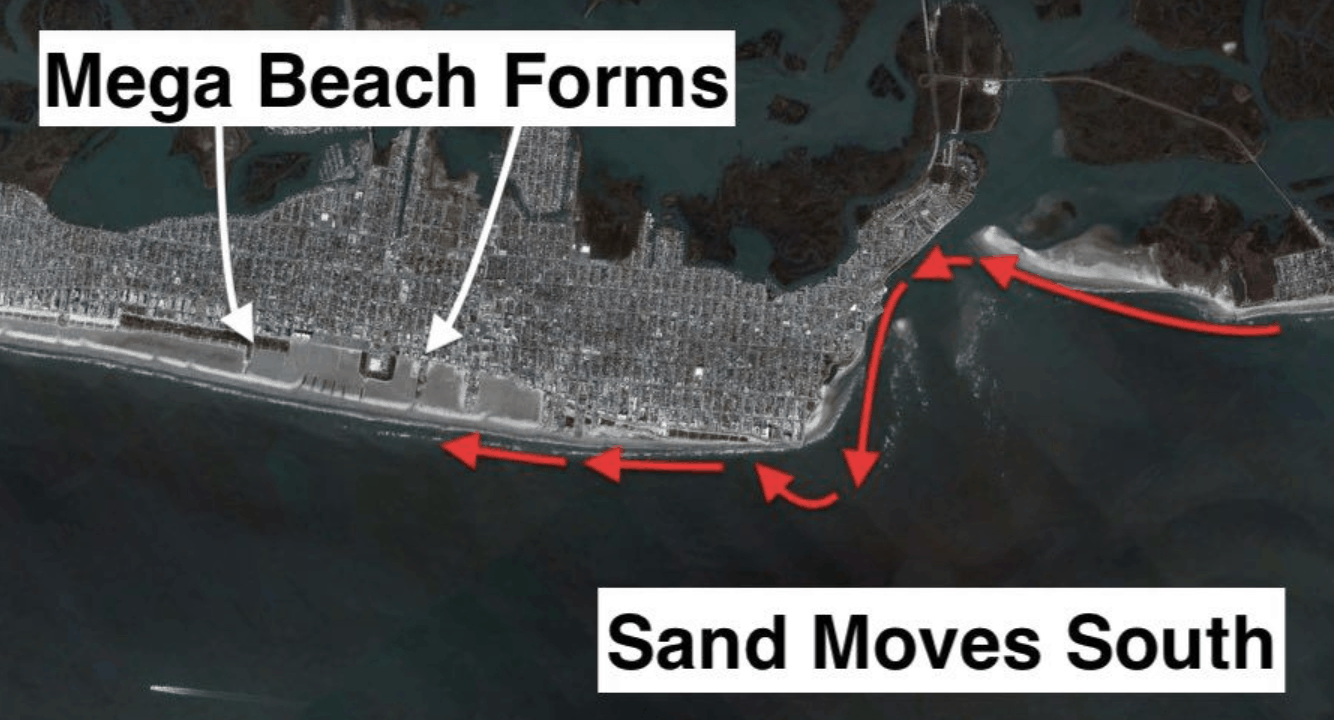 Explaining Why The Wildwood Beaches Are So Big

Why are Wildwood’s beaches so big? It’s a question that nearly everyone asks, but few know the answer too. Today, I’m going to attempt to explain the processes in the easiest way possible.

Firstly, let’s start with the Hereford Inlet. The Hereford Inlet is situated on the very northern tip of the island, right by North Wildwood. The Hereford Inlet controls how much sediment builds up on the Wildwood’s shoreline. Depending on where the channel is positioned, sediment can either be added, or eroded from North Wildwood, where it later makes its way to Wildwood and Wildwood Crest. “How does this work”, you might ask. Well, it sounds complicated, but it’s really quite simple. As sand moves south, it reaches Stone Harbor Point. During an outgoing, or “ebb tide”, sand is pulled away from Stone Harbor point, and washed into the Hereford Inlet.

With time, this sand will reach an area in which the wave energy, and current velocity, are equal. As a result, a sand deposit builds up at the mouth of the Hereford Inlet. This is called the “ebb tidal delta”. As sand continues to build up in the ebb tidal delta, it becomes full. All of a sudden, sand needs to be released. When sand is released, it detaches itself in the form of a sandbar, and begins to move towards North Wildwood. As this sandbar merges with the beachfront, it adds height and width to the beach, growing it.

However, as mentioned above, the main contributor of sand distribution to the Wildwoods was by far the Hereford Inlet. Let’s continue:

This is where Wildwoods growth spurt comes into play.

As North Wildwood beach was eroding, all of that excess sand either moved into the Hereford Inlet, forming the inlet beach, or south into Wildwood, expanding the beach tremendously. For Wildwood Crest, this change was most evident. From 1985, to the present day, portions of Wildwood Crest have grown over 700 feet, completely land-locking the fishing pier.

It’s thought that since 1950, 12,000,000 cubic yards of sand have deposited in the Wildwood’s. That’s forty billion pounds of sand! All said, the reason why the Wildwoods beaches are so massive, is due to processes that took place over many decades, that allowed sand from the Hereford Inlet to build up in North Wildwood, and then in later years move to Wildwood and Wildwood Crest.

Check out these other Wildwood Videos and articles

Santucci’s Is Coming To The Wildwoods in 2022

You Could Purchase This New Jersey Amusement Park!