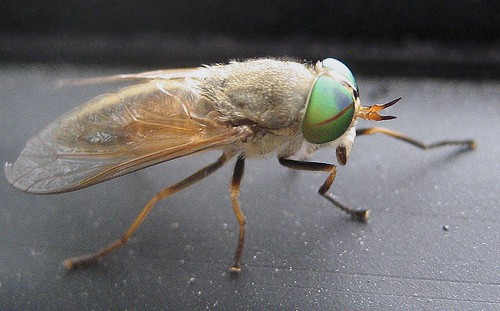 With all this hot weather we have been having lately a little breeze feels good but sometimes that breeze may not give you the perfect relief.

As we saw with these past couple of days, the sea breeze, or bay breeze, has been sending green heads bugs not only to the beach but all over the island.

We decided to do a quick little fact article about these fickle bugs.

The salt marsh greenhead fly, Tabanus nigrovittatus, is an abundant and bothersome summertime pest along our coastal marshes. Because the females bite during daylight, and because they occur in large numbers, have a long flight range, and attack persistently, they interfere with the enjoyment of coastal areas throughout much of the summer.

To anyone who has not visited the New Jersey coastal areas during “fly season,” the impact of these flies on daytime activities is hard to imagine. Greenhead fly populations reach peak numbers during July, but extend from late June into September.

Conventional methods of biting fly control, such as those used for mosquitoes are either environmentally undesirable or economically impractical. Both adults and larvae of greenhead flies are large in comparison to other, non-target organisms. Generally, more insecticide is needed to kill larger insects. The higher concentrations or greater amounts of toxic materials needed to obtain – greenhead control have undesirable effects on other insects and animals. Marsh water management by ditching may actually enhance greenhead production. Although high-level impoundments reduce the numbers of developing greenhead larvae, this is a costly and impractical approach to fly control for much of our coastal wetlands.

In studying the life history and habits of the salt marsh greenhead, we have developed several types of traps to capture greenheads in large numbers. These traps show promise as an inexpensive yet effective means of reducing the number of biting flies during midsummer.

Greenhead flies are produced from our coastal marshes. We have found as many as 70 larvae in a single square yard of marsh sod. Developing larvae concentrate along the upper vegetational zone reached by daily high tides. Foraging through wet thatch, surface muck, and vegetation, the predaceous larvae attack and devour a variety of invertebrates, including some of their own kind. Larvae overwinter and form a pupa after a brief period of spring foraging. The adult emerges from the pupa in late spring.

Adult flies mate on the open marsh. Within a few days and without seeking a blood meal, the female lays her first egg mass, consisting of 100 to 200 eggs. To produce additional egg masses, the female needs a blood meal. Among biting flies, blood serves as a rich protein source necessary for egg development. In the case of the salt marsh greenhead, protein for the first egg mass is obtained when the predaceous larva eats other insect larvae or small animals, but to lay additional egg masses she must obtain a blood meal.

Adult female greenheads move from the salt marsh to nearby -wooded or open areas along the marsh edge to seek suitable blood sources. There they await and attack wildlife, livestock, and people that venture close enough for them to detect.

Females live for three to four weeks in the uplands before they become too weak to bite. Because of this long life, larger numbers of’ blood hungry flies build up in areas near salt marshes.

Why don’t we have Greenheads on the beach every day?

Due to greenheads’ short live span, they normally stay by the marsh edge until there is a shift in the wind. Higher winds that move from West to East push these little guys on to our boardwalk and beaches. It is the main reason why we see greenheads in large numbers on certain days and not all the time.

Crabbing In The Wildwoods