May 2, 2022 – Wildwood, NJ – Mayor Pete Byron announced today that the US Economic Development Administration (USEDA) has awarded the City $3.2 million for the reconstruction of nearly 3 blocks of the Boardwalk.  The City was notified of the award late last week by US Secretary of Commerce Gina M. Raimondo.

“This is great news for our City,” Byron said.  “Despite our maintenance efforts over the past 100 years, much of the Boardwalk’s understructure and decking has been ravaged by time and nature, making total reconstruction of the Boardwalk necessary.  This award will certainly help us achieve that goal.” 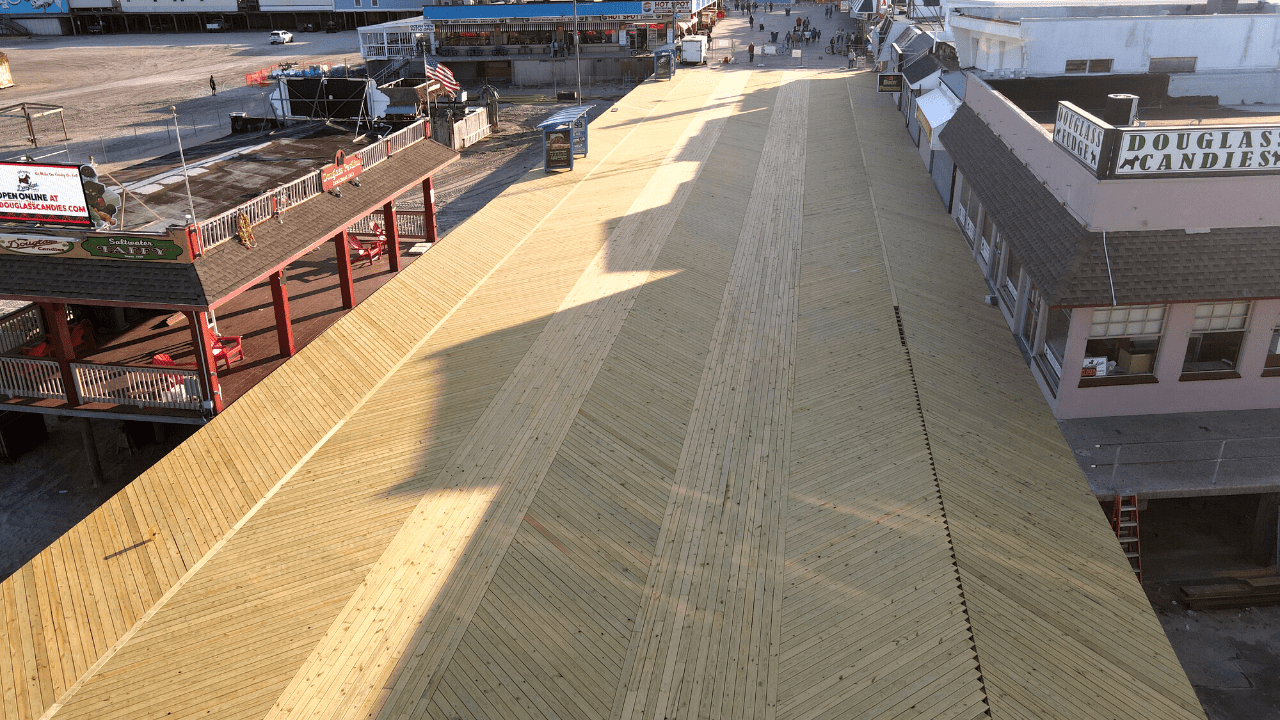 The City’s aggressive reconstruction effort was initiated last year when it began work on a three-block section of an eight-block area for which the needed permits have already been obtained.  That work, which is expected to be completed within the next few weeks, was funded by a $4 million FY 2022 state grant championed by Governor Phil Murphy. The additional five blocks are expected to be completed with an additional $4 million state grant proposed in the Governor’s FY 2023 budget.

Under the USEDA award, which will be matched with $845,000 in local funds, Boardwalk improvements will start between Pine and Maple Avenues and will run to Magnolia Avenue.

“With approximately 6 million visitors every year, the Boardwalk is the single greatest driver of tourism in the Wildwoods,” noted Commissioner Krista Fitzsimons, who oversees the City’s Department of Revenue and Finance. “Therefore, the need to rebuild this important economic attraction is central to the City’s ability to continue to attract visitors and help keep the local tax base stable.”

The USEDA-funded work, which is anticipated to create over 100 new jobs and generate $6 million in private investment, will include, among other things, the removal and replacement of the existing timber decking and stringers, concrete trolley beams and slabs, repairs to the current concrete substructure, and the installation of new timber stairs from the Boardwalk to the beachfront.  The City anticipates this work to be completed by June 2023.

City Commissioner Steve Mikulski also noted the City’s efforts to secure additional resources to carry out other needed Boardwalk improvements.  “We recently submitted Congressionally-directed Spending (CDS) applications to US Senators Robert Menendez and Cory Booker, requesting funding to design and install five new ramps at four street-ends so that the Boardwalk is more accessible.  We’re certainly hoping for a favorable review of those applications.”

The CDS and USEDA applications were prepared by Triad Associates of Vineland — a community and economic development firm that has secured over $1.2 billion in funding for its clients over the past 43 years.

“Cape May County generates, on average, more than $6 billion per year in tourism receipts — nearly 1/6 of the state’s total tourism industry – and a significant portion of that comes from the Wildwoods and our Boardwalk,” Byron concluded.  “Without a safe, attractive Boardwalk, tourism in the Wildwoods would be crippled and would devastate local, county and state tourism. So, I am particularly grateful for the financial support of the USEDA, the State of New Jersey and all of our partners in this important and impactful Boardwalk Reconstruction project.”